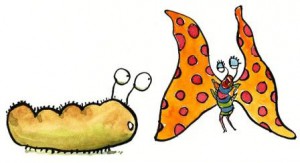 I know it’s weird, but it’s true. He fell in love.

A spider fell in love with a caterpillar!

However, small he was, the spider’s feelings for the caterpillar were huge .

He didn’t understand why, but every time he tried to talk to her, he got stuck, and then, well then, he gave up.

One day, the spider decided to finally tell the caterpillar that he liked her. He looked for her everywhere, but he couldn’t find her. She wasn’t home, she wasn’t at the park, so where was she ?

While he sat on his favorite branch and slept a bit on a shiny green leaf he saw a beautiful white butterfly. The spider couldn’t take his eyes from the nice butterfly. Just before he could greet the majestic being, she said;

“I wasn’t staring, but I am sorry if I gave that impression . I just wanted to say ‘Hi’.”

The spider felt strange when the small being didn’t answer the question, but she continued to talk:

“So? What is happening? You seem disappointed.”

“I can’t say I am disappointed, but the idea is that, I don’t know if you understand me, but I really like her.”

“a caterpillar. What is her name ?

The butterfly seemed to be surprised and the spider realized this.

The winged creature hesitated a little and then she said with a whispered voice :

And then with barely audible voice she added :

She flew away and left the spider alone.

Now, it’s been 7 days since the caterpillars disappearance, but the friendship between the butterfly and the spider is getting better.

They meet every day in the park or near the cliff, where they look together over the unlimited fields.

A nice jasmine perfume floats in the air, while she, the winged creature, who now has a name, Lu, says with fear in her voice :

“it’s true. I am sorry , I didn’t tell you until now, but when I heard that you liked her I was afraid that you would change your mind  about it.”

“You were afraid? Why would I change my mind about her? Because she ran away?”

“How can she have flew?”

The butterfly didn’t answer, but she gently moved her wings, and then she looked at the spider.

“Well, caterpillars, when they reach an age, they became butterflies. I am sorry I didn’t tell you from the beginning, but you need to listen. I like you too! I didn’t have the courage to tell you, but it’s true.”

“Wow! I don’t know what to say. I wasn’t expecting that.”

“You don’t need to say anything. Just look up to the sky.”

Immediately, the 2 insects looked up to the blue sky with soft curtains of clouds.

They stood like this for a long time, until Lara screamed.

“What happened? “ shouted the scared spider

But he never received an answer. It all happened in the tiniest sliver of a second. Immediately after he said the question the spider was eaten by a hungry bird.

And Lara, well Lara remained alone, but not for long.

Soon she met another butterfly, black as the night, and she fell in love with him. They spent the rest of their life together, but this didn’t last too long because they got eaten by the same bird that ate the poor spider.

The bird continued her life happy, after she ate the 3 innocent insects. But her life was short too because it came her turn to be eaten – by a cat. After the cat finished her snack she became the dinner for a dog.

The dog went on a vacation near a swamp, where he met a crocodile and became its breakfast. But the crocodile’s happiness didn’t last too long because he was hunted for his skin.

But what can you do? This is life. You are born and then you die.

In the end this is our tiny universe. All under a magnifying glass.

The End of the Unicorn King 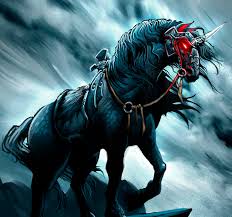 A long, long time ago, in the prehistoric ages, there was only one king, only one who ruled over  the universe. He was the all-mighty unicorn king. He had a secret that only his right hand  Benjamin the lizard knew. He was evil, and because the prehistoric humans on earth were dumb, he was using them to build statues of him. Of course, after some time everyone knew that the king was evil but it was too late to do something. He was gigantic, bigger than the universe itself. And how did he see each and every creature that lived, you’re probably asking. He used a magnifying glass, a magic magnifying glass which he not only used to see people, but to talk to them too. He saw the whole universe under a magnifying glass, but instead of using it to help people he used it to make people work for him. Everyone hated him but they couldn’t do anything about him being the king because if they got caught they would go to space prison for life for betrayal.

One day the unicorn king said:

”Planet  Puppy has no statue to immortalize my beauty! Benjamin!”

”Tell the puppies on planet Puppy to destroy the grand hospital and build a statue of me! I don’t care if their men, women, children or elders, they shall all get to work!”

But not even king unicorn knew everything because someone very close to him had a dark, dark secret. Benjamin was secretly planning to start a revolution, to take the king down! The only problem in his plan was how was he going to get everyone in the universe, especially the puppies on planet Puppy, to join  him while he angrily shouts: ”Down with the king, a new era should rise!” The clever lizard thought of many ways to get everyone to hear him but none of them were good enough. Suddenly, the best idea came to his mind:  ”why don’t I steal the king’s magnifying glass and shout through it so every living thing in the universe can hear me”! And that’s what he did. The night after he thought of this Benjamin stole the magic magnifying glass and started shouting so loud that even the smallest molecule in the universe heard him and started shouting back, even the king’s guards! Now everyone was shouting so loud that they awakened  the king from his beauty sleep. Knowing that he didn’t stand a chace against so many lifeforms he gave up the crown.

After that, no one was the king anymore. The universe entered an epoch of democracy in which we live now where everyone is equal and loves and respects each other. And to thank Benjamin for bringing peace the puppies on planet Puppy made him the president. The unicorn king retired and now goes by the name Mr. Unicorn and lives at the old unicorn’s foster home. As for the magic magnifying glass, no one knows what happened to it. Some say that Benjamin’s loud shout broke it, some say it’s still in the castle where king unicorn lived. One thing is for sure: we all see the universe under our own magnifying glass! 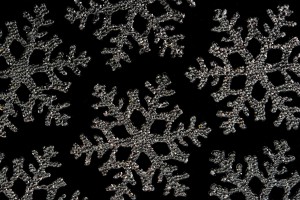 One day, in the Autumn of 1900, a boy named Paul was walking down the street.

Paul was an American boy who was very shy. He was living with his mother. Paul’s father died just 6 years previously in the Cuban War of Independence(1895-1898).

As I was saying, he was walking toward his house when a voice shouted  “HELP!”. Paul was scared by the voice and didn’t know where it came from. Just a few seconds later the voice shouted again “Up here smart pants!Help me”. Paul looked up but he saw nothing. He looked again, more carefully and saw a snow flake,”but how is this even possible, a snowflake in the middle of the summer just floating here, plus he is talking, I think I am seeing birds,” thought Paul.  After ten or fifteen seconds, the voice shouted again, and this time said “Are you going to help or just let me melt and die here?”

Paul was now sure that he was totally normal and that the actual snowflake was talking to him, (pretty hard to believe, don’t you think so?). He decided to pick the flake up and get it to a colder area(fridge). After he put it in the fridge, he asked why is it here and how? (as I said, it was the middle of the summer of 1900).

The snowflake said that he came here with his family and wants to live here, in this fridge(only if it’s possible).Paul asked if his family was there, with him, and the flake said yes. He wanted to see them, so he brought a magnifying glass to see better. When he pointed it towards the flake it started yelling that he wants to kill them.(Paul forgot that light melts snow).  He started wondering how to see his family without killing them, BANG, a bulb lit up in his mind, he could close the curtains, so the light couldn’t come in any more, so that is exactly what he did.He closed the curtains and picked up the magnifying glass and examined the flake. If you look carefully, you could have seen his family just moving and dancing around and around.

That is exactly why Paul calls it “The Universe Under a Magnifying Glass”(in the dark, obviously).